Six years back we were very happy to shift our house from Dr Rajkumar road in Rajajinagar to Vidyaranyapura. It was a nightmare to continue stay at Rajkumar road where the traffic is ever increasing with entire road becoming commercial now. The sound of all kinds of vehicle are so strong that neither we could hear our family conversation nor watch any programme on TV without any disturbance. In fact, the floor of our house used to vibrate whenever heavy vehicles passed through the road.

On the contrary, our new place Vidyaranyapura tucked far away from the maddening crowd, was in a serene quite atmosphere free from the dust and noise pollution when we shifted 6 years back. It was aptly named ‘Vidya-Aranya-pura ’meaning a Jungle area. We heaved a sigh of relief on shifting. We thought that at least now we could lead a peaceful life. But our joy was short lived. To our utter disappointment, the vast green fields around our area soon started vanishing and concrete jungle of houses and flats started coming up in all the direction at a very fast pace. Roads became dusty and uneven due to constant invasion of heavy trucks loaded with construction materials and bore well drilling machines. Road-cuttings became order of the day in all the lanes and by lanes to give vehicle owners, specially two wheelers jerks of their life time. These road cutting became a permanent feature never to be repaired again by any one.

With the new residents coming in with their pet dogs and stray dogs arriving in full strength from no where completed the corum to disturb others only at a time when somebody wanted peace and rest. How can Street vendors, beggars and ‘Basavannas’ remain far behind. They all joined together to add to the noise level. If this was not enough, than there are sounds at odd hours of ‘reverse gear siren’ of different tones fitted in cars or people honking near their own house entrance gate till some body opens the gate!

Now, we are in a fix whether to shift still further to another ‘Aranya’ or to live with the same kind of Noise & dust pollution!
Posted by Shri Ram Ayyangar at 7:10 AM 1 comment:

Email ThisBlogThis!Share to TwitterShare to FacebookShare to Pinterest
Labels: Satire

It has become a faishon to talk about making a city Singapore by our politician and city mayors.Let the talks of Magic Boxes , flyovers, elevated roads, Metro, mono/tube rails be kept aside for a moment and concentrate on the following points which are not of long term nature and can be implemented with a minimum outlay of funds RIGHT NOW FROM TOMORROW ITSELF if the authorities concerned local body & Traffic Police are serious about bringing about a change.
1. Remove or shift all the bus stops and auto stands which are situated immediately after a turning or circle. These are main hindrance in free flow of traffic. Penalise those bus drivers and auto drivers who stop the buses/autos at these turnings and bus stops.
2. Distance between two bus stops should not be less than half a kilometer. At present, there are many bus stops which are less than 100 meters apart and buses are not able to pick up speed.
3. Make footpaths free of hawkers. Stone slab footpaths are uneven. They should be properly plastered to have an even surface.
4. Public or for that matter any body including government agencies like water board, Telecom,Electicty board, cable operators who dig the road or footpath must be made accountable to restore them back to original failing which heavy penalty should be imposed.
5. Slow moving vehicles like bullock cart, hand driven carts, three wheeler rickshaws, Tonga, etc should not be allowed within the city limits during peak hours.
6. Any body driving two wheelers on the footpath to go ahead in a traffic jam situation must be penalised or his/her vehicles should be impounded.
7. At railway crossings, there is a common tendency by two as well as four wheelers to block the right side of the road in order to go ahead as soon as the train passes. This practice results in blockage of traffic on both sides of the crossing. Public who are also well educated should understand this.
8. Potholes on any road should be immediately filled up as soon as information is received. Road inspectors should be made accountable for not attending to any pothole.
9. Superior quality paint should be used for zebra crossing and other road humps as the paints used at present become faint or invisible after a weeks time.
10. Glow signs should be put up at the starting of all road dividers.
11. Trafic police should stop ignoring those who are driving talking over cell phone.
Posted by Shri Ram Ayyangar at 7:02 AM 1 comment:

Journey down the memory lane 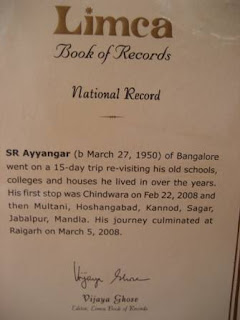 For the namesake there are a dozen Movie channels and equal number of Music channels in Hindi but all of them are treading the same old beaten path like “Bhed Chaal” (Movement of goats in a group). How many of them are really ‘Varied’ in contents?
Same movies or same songs are repeated and re-repeated day in & day out in all the channels. Like me, regular TV buff must have seen the Priyadarshan’s movie ‘Malamal Weekly’ not less than a hundred times on Sahara One channel and equal number of times on other channels.
Tell me the name of a single music channel which has a fixed separate slot everyday for classical music or devotional music in the morning or for that matter, is there a single movie channel which has a daily slot for old award winning or classical movies? Yes, B4U movie does show old songs and movies after 8pm but the problem with the channel is unlimited number of commercial advertisements. There would be minimum 15 minutes of commercial break. So much so that it is difficult to say if this is an ‘Advertisement channel’ where songs and movies are played during commercial breaks!
The fate of other so called entertainment channels is no better. There is a mad rush to churn out dance and singing competition in the name of reality show/ talent hunt, none of them are different in either content or presentation. Far from being simple, the backdrop set colors would be too gaudy and lighting would be so bright that you can hardly recognize the singer or observe the body movements of participating dancers. ‘Boogie Woogie’ on Sony is one exceptional programme which is best out of all the shows where the judges never hog the lime light. They facilitate the conduct of the programme in a dignified way without going overboard.
About conduct of the judges in other musical programmes , the less said, the better. The judges seem to be more interested in creating drama than judging the talent of participant. If using only a limited vocabulary of words like ‘Mind blowing’ ‘Fantastic’, ‘excellent’, ‘good body language’ and ‘Yaar Tussi great ho’ amounts to judgment, I too can become one!
Posted by Shri Ram Ayyangar at 8:01 AM 2 comments: