My blog was created in March’09 with 12 posts that year. The year 2010 is now coming to an end with 40 posts. In the past few months, the ‘indirank’ is consistently above 70. I take this opportunity to thank one and all for their support by way of visit to my blog posts and letting me know their views through posting their comments.
This year saw Rotary Club honoring all the volunteer counselor of first telephonic helpline called SAHAI (www.sahaihelpline.org) in November’10. 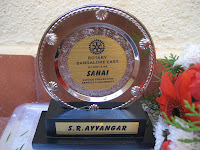 Rotary club (East) in association with NIMHANS and MPA (Medical Pastoral Association) commenced this helpline for prevention of Suicide and providing emotional support to depressed and people with low esteem. I am associated with this helpline since its inception as a volunteer counselor.No achievement can be greater than the joy and satisfaction one get when some one in distress get benefit from this helpline.
While 2009 saw my name entering in to ‘Limca Book of Record’ for my unique “journey down the memory lane” after taking retirement from service, the same recognition was again accorded to me in 2010 by ‘India Book of Records’. 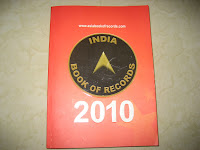 (Travelogue can be read at : http://srayyangar.blogspot.com/2009/03/journey-down-memory-lane.html
Another NGO ‘Sri Mission’ for whom I was editing their Awareness e-mail quarterly Magazine "MASTER" from the day one 8 years back, was discontinued in June’10
Here is a brief of activities in 2010 on my face book-
2010 Status Collage
http://apps.facebook.com/my-year-in-status/show.php?i=0df09628b4341152592eb5a6f9d3735e7c8835&from=done_pg
WISHING YOU ALL A VERY HAPPY NEW YEAR & PURPOSEFUL BLOGGING IN 2011.
Posted by Shri Ram Ayyangar at 8:26 PM 26 comments:

Email ThisBlogThis!Share to TwitterShare to FacebookShare to Pinterest
Labels: Self Review

Posted by Shri Ram Ayyangar at 3:32 AM 6 comments:

Email ThisBlogThis!Share to TwitterShare to FacebookShare to Pinterest
Labels: Hunger

LOC- The Line of Control

This article is not about our country’s border issue where actual line of control (LOC) exists. Any intruder crossing the LOC lands in trouble and sometime become a contention for war between two countries. Similar situation exists elsewhere also.
While moving around in a big city like Bangalore, one often come across traffic signals which to me are no less than a LOC. Believe me or else observe it yourselves next time. The heavy traffic built up on both sides of road at a traffic signal is like troops across LOC almost ready to strike at the command of the traffic signal. So are the people in two or four wheelers waiting restlessly for the green signal. Their one hand or leg would be throttling the gear to full extent while the other one would be pressing the clutch to release it any moment. Fingers would be on horn button for continuous honking and the moment signal turns green, all hell breaks loose. The Great War begins and now it’s a race against time.
Two wheelers starts zooming from all possible sides and space including side walk while the desperate four wheeler drivers get busy honking even before the signal turns green. For a few seconds, there would be utter chaos and confusion. Nobody would be able to move an inch. The army of all kinds of vehicle across both sides would be face to face with no one ready to give way to the other. In the meantime some gentleman would start abusive/verbal duel which goes on for some time. The traffic police would be watching this battle helplessly for some time and then enters the ‘Chakravyuh” to pacify the desperate road soldiers. In the next 30/60 seconds , the light turns red and the battle comes to a halt as if ceasefire is declared but later continues again……
Another kind of LOC can be seen in front of those houses where there is a road and big trees. The dry leaves keep falling on the road but the point of contention arises between house owners staying in the vicinity of the tree as well opposite of it. Who should clean up the mess everyday on the road because the civic authority do not arrange for sweeping of the road. Even though there may not be any mutual understanding, it is presumed that only that portion of road in front of the house would be cleaned which falls in front of their house that is half side of the road. The other half falls in front of the opposite house so they should clean up. Thus, a LOC is drawn.
There would always be a possibility of a war if the bunch of leaves while sweeping flies or comes in the territory of the other.One can always vouch for the undercurrent of a cold war brewing up. One thing is sure that they would be keeping a watch on each other like a hawk while any one of them is sweeping to find if they are deliberately pushing the leaves across LOC and rest assured, that day would be a dooms day!
Posted by Shri Ram Ayyangar at 5:57 AM 14 comments:

Email ThisBlogThis!Share to TwitterShare to FacebookShare to Pinterest
Labels: Satire

It seems that the department of traffic in Bangalore is receiving several complaints from motorists and two wheeler owners about the police constables suddenly stopping or chasing their vehicles on busy roads and signals to verify vehicle related documents, resulting in vehicles coming from behind ramming into the other. Many a times these constables can be seen running after the vehicle and trying to catch the offender from back resulting in either of them getting hurt or even falling from the vehicle and getting injured. In one case the police caught hold of the two wheeler handle so firmly, the driver was thrown off the vehicle and sustained multiple injuries. In another case the police while holding the door handle of a car was dragged several meters away! Thanks to number of complaints, the police authorities have now woken up to issue clarification in the matter.
According to the Additional Commissioner (traffic), an officer of the rank of Assistant sub inspector (ASI) or officer above them only can stop motorists and penalize traffic rule violators. They are equipped with a black berry smart phone that records and monitor every fine and offence. City police commissioner has further clarified that unless the motorists have violated any traffic rule the police have no authority to stop the vehicle merely for the sake of checking the documents. This implies that one must be aware of all the traffic rules and if one is confident that he or she has not broken any rule, they have every right to question any cop who stops them.
So far so good, but is it so easy in reality? In majority of the places traffic is manned by police constables and ASI may not be there all the time at all the places. In such a situation, if a constable stops to verify documents, can one dare to refuse? If refused, he can very well tell the ASI later that you have violated some rule and can get you a notice issued at a later date! They can quote 101 reasons for traffic violation if bent upon to teach the motorist a lesson for arguing or questioning their authority. However, the only silver lining is the assurance and press statement given by the ACP (traffic) that based on motorists complaint against the errant traffic police and if found guilty, departmental action would be initiated against them.
Posted by Shri Ram Ayyangar at 10:17 PM 13 comments: